Do you ever have Adele songs going round your head? At the moment she’s turning tables – it’s not even a song I like that much, so I don’t know it that well and the same bit keeps going through my head. I know I’m supposed to be writing about Chimney Sheep™ but it’s hard to concentrate when she’s close enough to start a war God only knows what we’re fighting for. 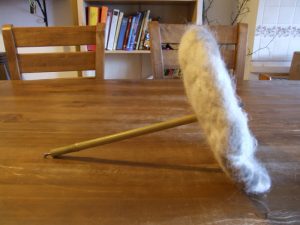 Today I want to tell you about the handles. It might not be that interesting for you but it was a really really hard part of the product development so I’m going to tell you anyway.

My priority was getting the felt head right, as that was the working end of the product. The first felt disc that I made was attached to a piece of bamboo cane with a threaded bar shoved in the hollow bit and a hook screwed in at the bottom for the dangle. I used a couple of wide washers to reinforce the head and voilà: it worked! although it didn’t look very elegant and it wasn’t very fireproof. The whole idea of the sheep is that it is used when the fire is out but as we all know the person lighting the fire isn’t necessarily the person who put the sheep in there, and we don’t want the whole thing bursting into flames.

My first thought was to have the handle made out of metal. Recycled aluminium was my ideal. I went to talk to a fellow at a nearby aluminium extrusion factory and he sort of flattened that idea. Too expensive, as it would need to be worked or moulded and couldn’t be done as easily as I had thought. And aluminium isn’t that strong, so the threaded part would be a weak bit that could easily break off.

At that time I was thinking along the lines of three different sizes of handle, threaded bar at the end, and massive metal washers supporting the whole thing. I bought a set of kitchen utensils from Wilkinson’s, sawed the ends off, warmed them up over my gas stove, bent the ends into a curve, sawed some bits of threaded bar to the right length, and glued them in. I fitted the wool head and voilà: the whole thing fell to bits. So I took them to a local metal fabricator who rolled his eyes a bit but welded them together for me and I ended up with quite a serviceable prototype. 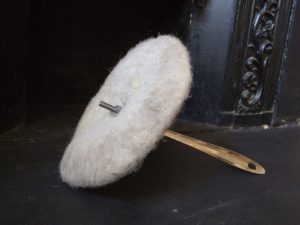 They did some designs for me and printed them off on a 3D printer. How clever are they? You give it a CAD drawing and it prints a 3D object. The original design was a clamp similar to the one I use now, but with the handle fixed in permanently. The idea was to have a telescopic one size fits all handle. This was going to end up being more complicated and expensive to manufacture than the original metal idea. We tweaked it a bit and came up with the threaded option. We were just getting somewhere. I just needed the long narrow clamp designing and I could start looking at tooling it. 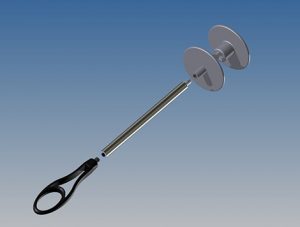 That’s as far as their funding could take me. I don’t know how much C-Tech cost, but without their helpful interfacing we could have got the handles done in half the time at half the cost. Still, if you ever go that route of getting free help, you find you are grateful for everything and not really in a position to be too demanding if you’re not entirely happy with what’s being done for you. Maybe I’m just too polite to be a proper entrepreneur. So there I was, with some partially completed designs, some ideas of what I wanted, and no idea where to turn next. I did offer to pay Lancaster University to complete the project, but they were not able to operate commercially.

I searched for CAD designers in Cumbria, but they were all too busy to help. Really, one phoned to say he was looking to employ someone as he had more work than he could handle but he was struggling to find anyone qualified. Others just didn’t get back to me. If I ever get stuck selling Chimney Sheep draught excluders I might re-train as a CAD designer…I found a fellow whose company was reassuringly called CAD-man-do though sadly as it turned out CAD-man-couldn’t do the sort of drawings I wanted. Despair was beginning to set in. Finally someone knew someone who knew someone who put me in touch with Peter Grayson of GEO ltd. What a great guy! He looked at my hand drawn sketches, got the hang of the product, suggested areas where it should be strengthened, tweaked, adjusted and improved. He did the CAD drawings for me and voilà: we were back on track!

I don’t know about you but I think that’s enough about handles for now. That’s by no means the end of the saga but I’ll tell you about the tooling part of it next time…..and what do you know? I’ve almost faded Adele out.