This is one of the most exciting things I have ever bought – about as exciting as buying a house, and definitely more exciting than buying a car (perhaps a sign of my age!). Regardless, it has been an ambition of mine for a good number of years and I have now found myself in the financial position to make that dream a reality. When I tell people the exciting news, I’m met with two responses.
Some people say, “Oh, wow, how exciting, lucky you! I’ve got a spare tree you can have. In fact, I’ll come and help you plant trees!” They just understand immediately why I’ve bought it and share my enthusiasm for the project.

The other response is “…Why?” This is a lot harder to explain but perhaps more important to respond to than those who already ‘get it’. So, that is what I shall try to do…..
I’ve been concerned about the environment since I was a teenager – I was an environmentalist before there was even a concern about the ozone layer. Way back when I was a young teenager in the 1980’s there was no mention of climate change or the greenhouse effect. But to me, it always seemed wrong that we were using up the earth’s resources at a much faster rate than it could regenerate them. It didn’t make sense to me that we were using chemicals to poison plants and insects, or using antibiotics to enable mass factory farming. It seemed wrong to treat animals as factory commodities. And, it seemed pointless not to recycle materials that could easily be recycled, rather than continually making new stuff that would soon add to the existing piles of rubbish.

At the time, my views were seen as a bit of a ‘hippy’, alternative way of thinking. Now though, we all seem to be quite familiar with the concept of climate change (and if you aren’t you’d better go and read up about it now!). I don’t quite know when the phrase unsustainable came to be common parlance. But that’s what I was concerned about, and still am: using resources sustainably. Working to minimise the release of carbon dioxide, methane and various gases that cause the atmosphere to heat up at ever increasing rates. The fact of the matter is, we all have a role to play in this and we should all be doing everything in our power to decrease climate change.

Why do I want to plant trees?

Well, on a global level deforestation has had a monumental role in increasing the effects of climate change by cutting down the very thing that helps to absorb all the excess CO2 we create – trees! That, as well as destroying habitats and whole ecosystems. The Amazon rainforest has been depleted for so many years now that I’m surprised there’s any of it left. Forests in Indonesia are too – being cut down to plant palm oil and destroying orangutan habitat in the process. And a multitude of other places. Basically, there’s just habitat depletion going on all over the place. Just to show you; according to the World Bank, between 1990 and 2016, the world lost 502,000 square miles (1.3 million square kilometers) of forest—an area larger than South Africa in just 26 years!
Although I tried, little old me couldn’t really do much about any of that. And trust me, I tried – I’ve been on demonstrations, signed petitions, written to MP’s, picketed multinationals, all that sort of thing and the habitat depletion just carries on. There are some good news stories of course, but no matter how hard I tried I didn’t feel like the actions I was taking made any difference one way or the other. Don’t get me wrong, I still support many ‘big scale’ campaigns but I realised that to see immediate change, I had to look at things on a smaller scale. Things that were right in front of me.

And so as time has gone on, the phrase “think globally, act locally” has become more and more poignant to me. In fact, it is relevant to all of us. I couldn’t do much about everything happening in other parts of the world, but I started to think that I could take my own action locally. And so I started to plant trees right here in Cumbria. Planting trees makes the world a better place – fact. They grow quickly, absorb more carbon dioxide than they emit, retain water, reduce soil erosion and reduce flooding. They provide habitat for hundreds of creatures which in turn are part of the food chain for hundreds more creatures. The big, spectacular, cute, and critically endangered species grab the headlines but we have plenty of wildlife in our own country that need our support just as much as the orangutans, penguins and tigers do.

For years now I’ve kept rescue trees in pots and re-deployed them elsewhere. More recently, I have started to grow them from seed, and have had increasing numbers of trees in pots at home. When I ran out of space there, the hard standing at work became covered in trees in pots. It has been baby tree galore!  My partner and I have spent many a weekend biking to remote parts with trees in rucksacks to surreptitiously plant them in out of the way places. We’d go for walks with secateurs so we could cut bits of willow and poke them into damp ground to create instant trees. Rebellion comes in many guises and here we were in the Lake District being guerrilla tree planters going for bike rides with gardening tools.

However, as good as our intentions were, when you plant trees on other peoples’ land you have no control over the welfare of the plants or the long-term outcome of the land. So, it then became an increasing obsession to buy a piece of land of my own that I could plant my trees into and cultivate my own woodland.

Eventually finances and circumstances came together to enable me to buy the seven acre piece of land I mentioned at the beginning. It was an overgrown tangle of brambles and rushes – not good for farming but perfect to plant trees in. I took ownership of it in January so it’s been exciting to see what plants already thrive there. It’s mostly wet so best suited to willow, alder, and poplar and although it’s been left untouched for a number of years willow and alder trees have already started making themselves at home. All we are really doing is accelerating the natural succession from grassland to scrub to woodland, and introducing a bigger range of species than would find their way there of their own accord. It’s sad to see how quickly ash are dying from ash die-back in our area, but in order to cope with climate change and the onslaught of tree diseases and invasive species it’s necessary to have a range of tree species in the mix. I’ve already got to work and planted a load of elm for example and they are thriving. Also sweet chestnut, walnut, hornbeam, field maple, as well as the more familiar oak, hazel, holly and scots pine.

I’ve experimented with tree planting methods too. I loathe the plastic tree guards that are used to protect young trees from grazing mammals and the elements, so I’m risking growing trees without them. Some have been nibbled by deer and a grumpy hare comes in and snips the odd tree in half but we’ve got a few friendly tricks to ward off these guys. We’ve also tried direct seeding and making seed bombs to tuck into the more overgrown parts of the site (more of that in another article).

All in all, it is just such an exciting project. The field is very much a team effort. I couldn’t have afforded it without the success of Chimney Sheep. It is enormously gratifying to have a business that sells environmentally friendly products in order to finance the purchase of land, which in turn, takes direct action to benefit the environment. So I’m grateful to both my staff and customers alike who have helped me grow Chimney Sheep to the point that I’ve been able to achieve this. And although 7 acres seems like a huge undertaking – we will plant around 9,000 trees in it by the time we’ve finished – it’s made me realise that this is just a token effort. We need to plant trees by the million in order to mitigate against the greenhouse effect and to restore habitat loss. I haven’t got time or patience to wait around for other people to take responsibility for this. So, I’ve found myself in a situation where I can take positive action myself and I encourage you to do the same in whatever way you can.

Team Chimney Sheep’s mission is to keep at it; keep selling our eco-products, keep buying land, keep planting trees. 7 acres is just the start of things…. 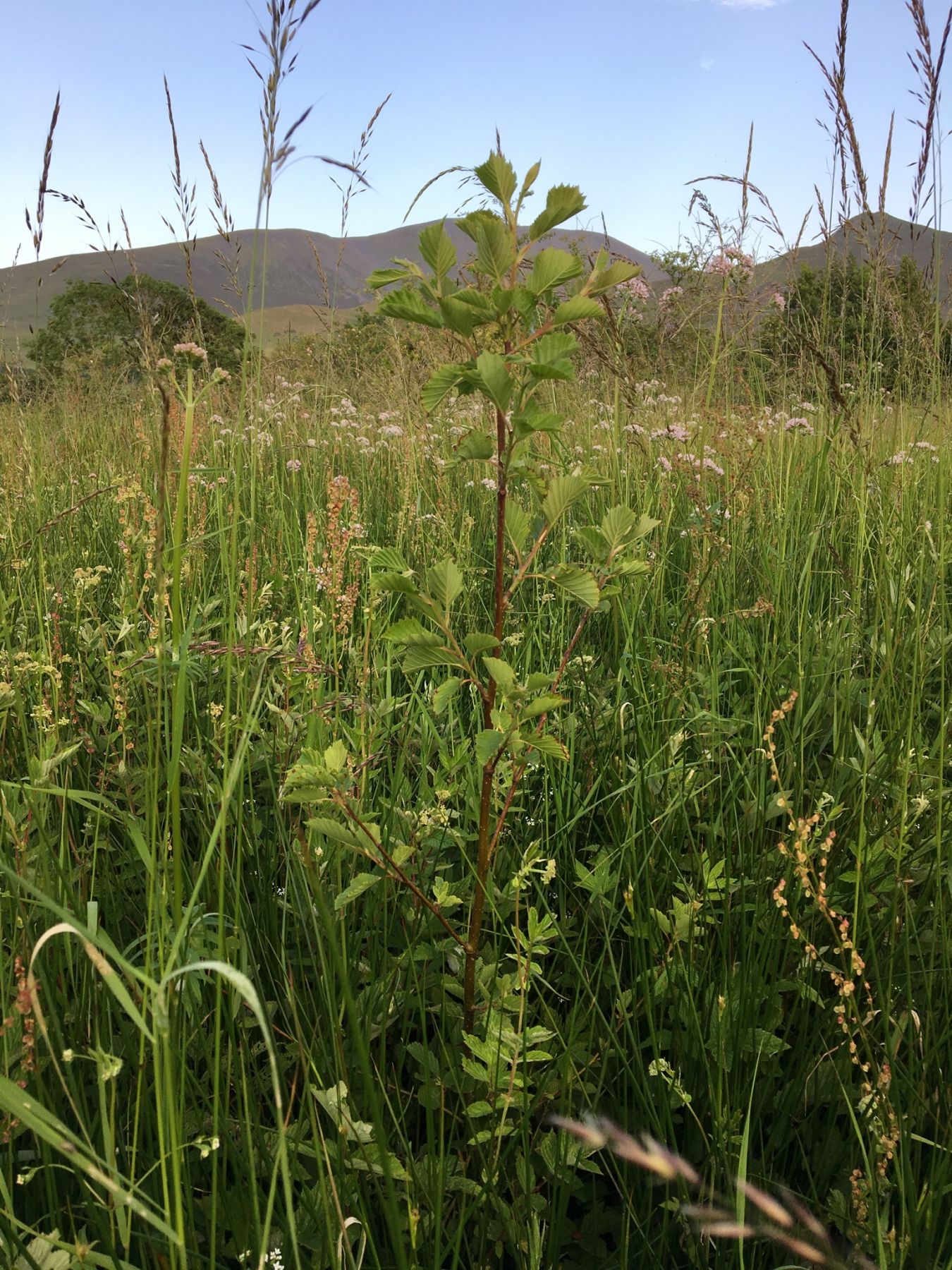