The more I find out about it, the more I realise how widespread the benefits of mulch are, both for domestic gardeners and widescale horticulturalists, farmers and foresters. Studies of mulch in draught-prone countries have demonstrated how the water-saving properties of mulch improve crop growth and reduce herbicide use through natural weed suppression. It’s a technique that’s been around for millennia, but it seems to have fallen out of favour through modern farming methods. Mulch is enjoying a come-back. I’ve certainly noticed the benefits of mulch in my garden and in my field-on-its-way-to-becoming-a-forest.

Mulch is defined as any material that is placed on the surface of cultivated soil. They can be placed over beds / fields or over compost in individual pots. I would extend the definition of mulch to include uncultivated land. I’ve been using it successfully to smother grass and weeds that compete with newly planted trees in my field-on-its-way-to-becoming-a-forest (you are going to get fed up with hearing about this, but not before I’ve told you a lot more about it first!). (Bit more here now if you’re curious)

What are the different types of mulch?

Mulch can be organic or inorganic. Traditional mulches include straw from a crop. Masanobu Fukuoka is sometimes known as one of the fathers of permaculture, although at the time he phrased it as “do nothing farming”. Well not exactly that, as he said it in Japanese, but that’s roughly how it translates. He was a biologist who studied conventional means of farming grains for years, but pioneered a natural way of growing barley and rice, managing the weeds with straw mulch, developing a rich biodiversity and encouraging natural pest control by having a healthy population of pest eaters. His book The One Straw Revolution makes a fascinating read.

Other organic mulches include bark, wood chips, grass cuttings, leaf mould, compost, sawdust, wood shavings, brashing from tree felling….and our own lovely jute mats. Other loose organic mulches have to be laid in relatively thick layers in order to fully supress weeds and retain moisture. The advantage of the jute mats is that they are only 5mm thick but do the job of an inch of something like bark chippings. The jute is tightly felted to make a thick barrier but is still breathable, and lets moisture through, unlike synthetic fabric barriers.
Organic mulches break down gradually to release nutrients into the soil and help improve its structure. Layers will need replacing when the material has fully rotted down. Our lovely jute lasts a good year so it doesn’t need replacing often.

Inorganic mulch includes materials like pea gravel, crushed rock, slate chippings, plastic sheeting and polypropylene matting. The gravels and such can look neat and like all mulches retain moisture and supress weeds, but they don’t do anything to boost the fertility or structure of the soil. Sheet mulches or woven landscape fabric are ideal for new beds or borders. After laying, slits can be made in the fabric, allowing direct planting through it. However these mulches do not look very attractive, so in a non-agricultural situation gravel, bark or others materials is often added to camouflage the plastic. To allow rain and irrigation water to reach the roots it’s best to choose a permeable sheet. Our large rolls of jute are the best of both – you can lay out large quantities of it, cut slits in where you need to, and it will let water through, (in an into-the-soil direction) and look a lot more attractive than plastic.

What does mulch do?

Depending on the type of mulch used, there are many benefits of mulching including:

What are the benefits of mulch?

There are three main benefits of mulch:

When Masanobu Fukuoka talked about his “do nothing” style of farming, he didn’t mean he was a lazy farmer. He was pretty blimmin busy with all the things he did. He could sow acres of land single handed. He also popularised seed balls as a way of aiding germination. By doing nothing, he meant not bothering the soil too much. He described how ploughing it encourage the deep-rooted weeds such as docks to flourish, necessitating the need for herbicides. By smothering the ground with mulch in between the plants that were to be protected, the weeds couldn’t have access to light, couldn’t photosynthesise, and therefore perished and eventually rotted away into the ground. You can see this in action if you leave something out on the grass for a couple of weeks. The grass starts to go yellow and eventually dies. Grass is pretty resilient so if you take the cover off soon enough it bounces back, but if you leave it there for a couple of months it dies. That’s what mulch is doing, whether it’s on your veg beds or on plants in pots.

Water is an increasingly scarce commodity and any way we can use less of it is useful. Mulch allows water to permeate through it into the soil below (apart from sheet plastic mulches) but it forms a barrier that reduces the amount of water that evaporates off the soil’s surface. It also prevents the soil from getting as hot as it would if it was uncovered, reducing water evaporation. And in so doing, it encourages water to seep deeper into the soil. This encourages a plant’s roots to reach deeper into the soil which is good for the plant and enables it to find its own deeper water reserves, and ensures water is more likely to be retained in the soil since the deeper it goes the less likely it is to evaporate. I was astonished by a hole in the ground last summer. Yes really. Maybe I am easily astonished, but anyway, even in the Lake District it got really hot and really dry for several months and we enjoyed it for a while then the trees started shrivelling up and the lakes got too low to sail on and it was a bit of a worry. Then the day the children broke up for the summer holidays, the 22nd July, it started raining and it carried on raining for months after that. So after several weeks of rain we had to dig a deepish hole, about 1m deep, and here’s the astonishing thing: the soil was bone dry from about 15cm down. It was wet at the top but digging down the soil was still dry. So. The point of all this is to say that if you can get water to stay deep in the soil, it’s better for the soil and much better for the plants trying to survive in drought conditions and post-drought conditions. Mulch it.

Mulch acts as an insulator, helping to regulate soil temperature to keep plant roots cool in the summer and warm in the winter. Mulching is especially important for new plantings done in the autumn that are still tender as temperatures begin to plummet.

What are the benefits of felted jute mulch?

The jute mulch we sell is natural, 100% biodegradable, made of recycled coffee sacks. It is dense so it sits heavily on the ground and doesn’t usually need pegging out. It’s thin so you don’t need a big thick layer of it to work – 5mm of jute is equivalent to around 25mm of bark chippings. It does all the things you want mulch to do, and is neat and easy to apply. It lasts around a year. We have tiny mulch mats for tiny plants and larger tree spats for young saplings and entire rolls of the stuff for hedges, beds and larger planting projects. 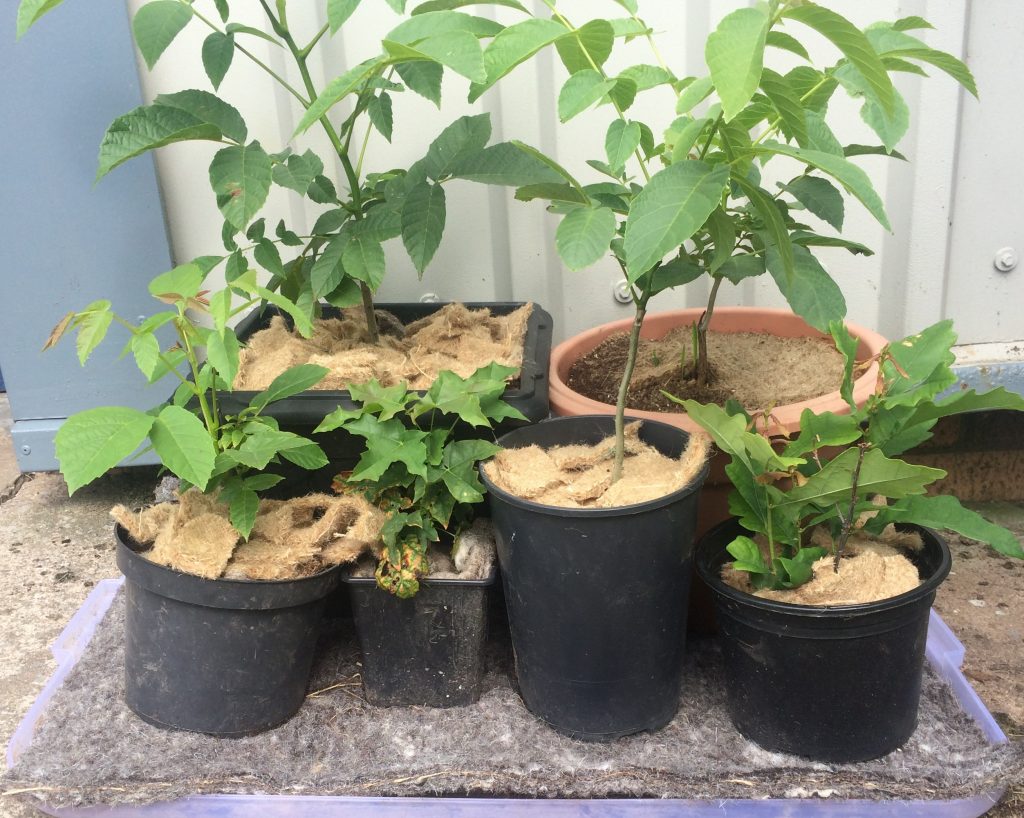 What are the benefits of wool-and-jute mulch?

I keep going on about how great our jute mulch is but we also have sheep wool that has a thin layer of jute hessian in the middle. This has a multitude of uses (read more about them here) but it also makes an excellent mulch. The wool breaks down more readily than the jute, so it doesn’t last as long, but the wool provides valuable nutrients including nitrogen and phosphates so it acts as a fertiliser as well as mulch.

What are the disadvantages of mulch?

If laid correctly there is generally no problem with mulches. However, if they are in direct contact with the stems of trees or specimen shrubs they can cause the stem to soften, making it vulnerable to diseases. This is another advantage of the jute mats, since being thinner than applying a thick layer of mulch there is less of a risk of the mulch being heaped against the trunk and inadvertently mulching the plant you’re trying to protect.
Depending on the quality of the material there is a possibility of introducing weeds, pests and diseases to the garden and with woodchips there is a slight risk of introducing honey fungus.
A build up of mulch can produce a hard layer, which is difficult for water to penetrate. Avoid this by only replacing a mulch when it has completely rotted away.