It is no exaggeration to state that a recent innovation by an Austrian wool manufacturer is going to revolutionize the wool industry. Most of us have fallen victim to clothes moths at some stage, and infestation from moths is on the rise. A recent study by English Heritage found an increase in the numbers of the common clothes moth in the UK and worryingly an increase in the pale-backed clothes moth which is thought to be a consequence of climate change.

What options are there for treating wool against  clothes moths?

Conventional clothes moth treatments comprise highly scented deterrents which need replenishing every few months, hormone traps which need replenishing every few months, or toxic pesticides which are lethal in the very short term. Treatments impregnated into the wool fibres must be consumed in small quantities by the moth larvae before they perish. This is acceptable for moth products that are relatively sacrificial, such as wool loft insulation, but is not a viable treatment for garments or any precious wool items.

How are Chimney Sheeps treated against clothes moths?

We’ve been treating our Chimney Sheeps with borax. This is in fact a fire retardant that leaves a crystalline deposit on the fibres. These fibres cut the larvae when they attempt to eat them causing them to perish. It’s always been the most environmentally friendly option that was available to us, and in fact since permethrin was banned it’s been pretty much the only option available. However I wasn’t entirely satisfied with using borax for a number of reasons. I’ve been looking long and hard for viable and sustainable alternatives.

My search eventually led to a company in Austria. Alex the CEO is an engineer who has been working for years on the moth problem. His company makes a wide range of household wool products, including loft insulation, cavity wall insulation, underlay, and sound absorption to name but a few. As he puzzled over the conundrum, he noticed that there are some fibres in nature that moths are not attracted to. Although a real menace in the home, moth species whose larvae devour keratin serve a useful function in biodegrading wool, fur, hair and feathers such as those in nests or owl pellets. Alex noticed however that some fibres, such as spider webs, were avoided. Further investigation led him to realise that this was due to the ionic charge of the fibre.

After extensive research and development, Alex developed the patented and secret method of Ionic Protect. It’s described as a plasma treatment for wool, that changes its ionic structure. It looks like wool, smells like wool, acts like wool: it is wool! But the moth doesn’t recognise it as wool. After the fibres have been treated with Ionic Protect, the moth is not attracted to it and does not even attempt to lay its eggs on the fibres. It has been thoroughly tested to the industry standard CUAP test for clothes moth and carpet beetle attack.

As soon as I discovered the Austrian company and their moth control treatment I knew that was the answer, if only they could treat the Herdwick wool for us. They used their own wool supplies, which makes a lovely soft felt, but it was too soft and lovely to be suitable for Chimney Sheeps. The Chimney Sheep is made from Herdwick wool which has thick wiry fibres which give it the combination of rigidity and compression that is necessary for blocking chimney openings.

We had a few conversations about how to achieve this and the conclusion was that if I could collect a minimum of 5 tonnes of Herdwick wool and ship it over, they would be able to treat it for me. Let me just say, that 5 tonnes is rather a lot of wool. However I had been toying with the idea of collecting it directly from farmers for a while. We are surrounded by sheep farms, and the process has always been for the farmers to send it to the collection depots, from where it goes through several buying and selling processes before we buy it ready-felted from our UK supplier. By buying it directly from the farmers, I can offer them a better rate than they would get from the wool marketing board, and by cutting out a few steps along the way it would be more affordable for me. With the cost of the extra shipping to Austria, and the cost of the special treatment, this was going to be the only way the plan would be feasible. Operation Wool was put into action.

Farmers were contacted and they agreed with the plan. Collecting it up from all the farms was interesting as it meant chatting to all the farmers about farmer / sheep / landscape things. It was also blimmin hard work as it involved physically lugging huge unwieldly wool sacks each weighing around 80 kilos onto a trailer then transporting them to the haulier. 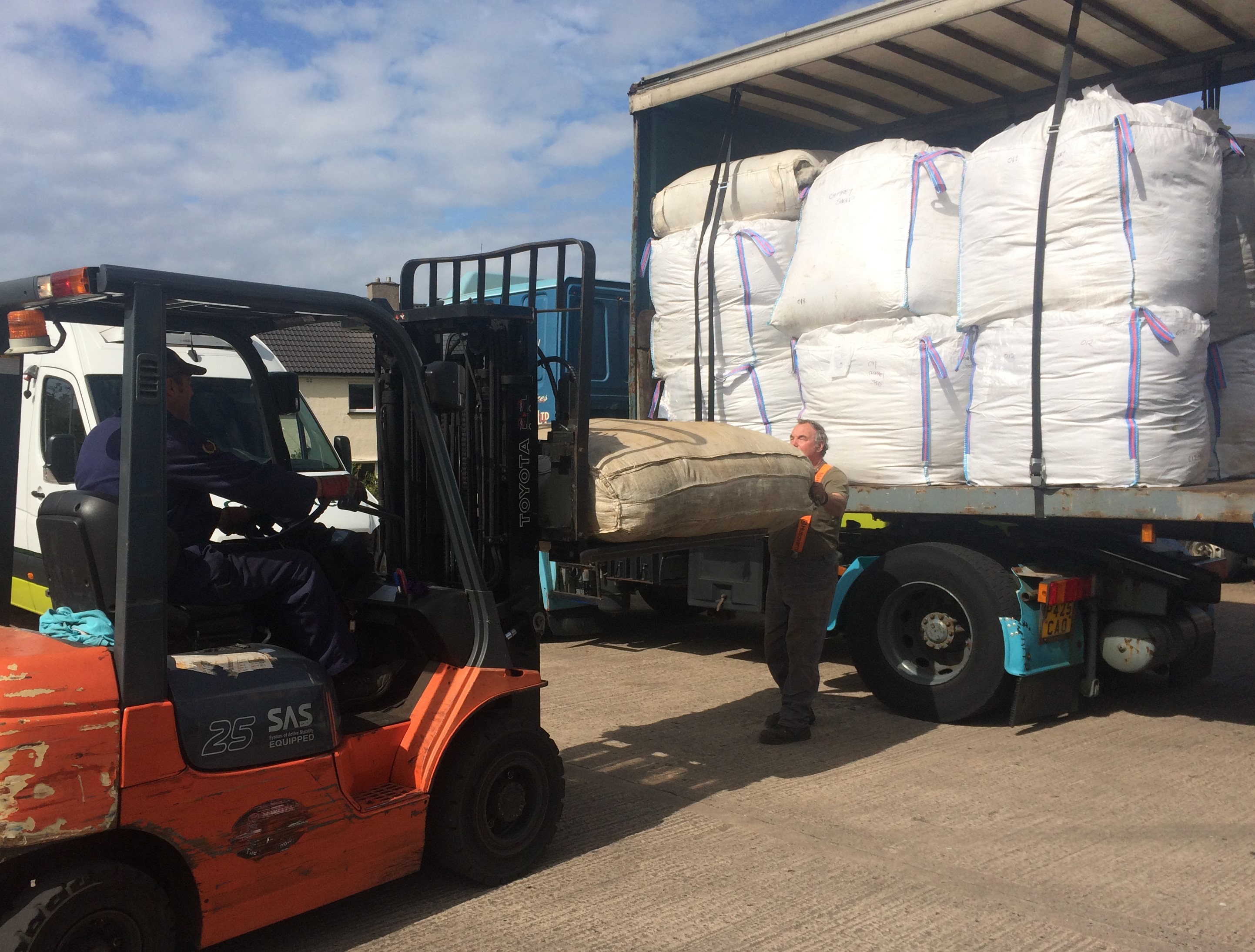 5 tonnes of sacks full of wool nicely filled an articulated lorry, and these were transported to Yorkshire for scouring. Raw wool is filthy stuff. Herdwick sheep spend all their time roaming the hillside, alternating their time between grazing and rolling about in mud and poo. When it’s hot they sweat, and they produce a lot of wool grease to keep their wool waterproof against the almost daily occurrence of rain. Suffice to say the wool takes a lot of washing, and it needs to go to a specialised facility that can wash it, extract the useful stuff (lanolin and fertilizers) and safely dispose of the waste water.

The washed wool was baled up then sent to Austria. A few months later it was delivered back to us in Maryport, and now we have beautifully made wool, 100% moth proof with no chemical additives. It has been hard work and more expensive but well worth it. 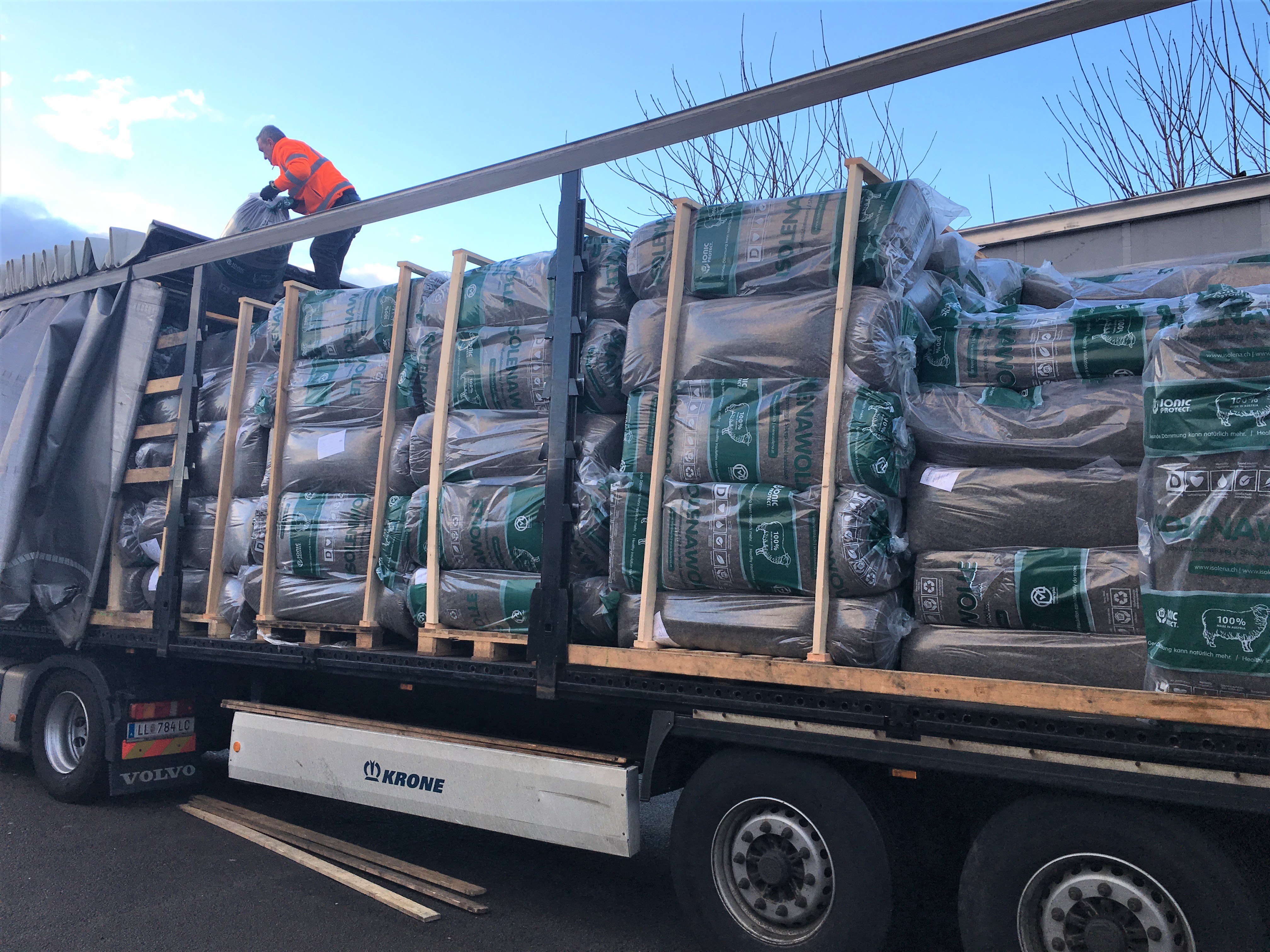