Mrs Emley was perfectly happy with the bats living in her chimney. Living in a rural idyll in the Lake District, being surrounded by nature is part of what she loves about her beautiful house. But when the nature started taking a turn the wrong way, and exited the chimney via her bedroom fireplace rather than the chimney top, it was time to get the bat volunteers in.

Bats are harmless, but it can be very disconcerting to have half a dozen of them flying around your bedroom, so we were very sympathetic. It soon became apparent that they were roosting under the roof tiles near the chimney, and some were accidentally finding their way into the bedroom. Bats have a natural curiosity and will explore new potential roost sites. Once they get into an enclosed space like Mrs Emley’s bedroom, they get distressed themselves if they can’t find their way out. It’s not good for the occupant of the bedroom and not good for the bats.

Luckily, the solution was simple: put a sheep in the chimney! She had a tiny bedroom fireplace, with a trapezium shaped opening measuring 9 inches by 5 at the longest parts, so we made a made-to-measure sheep and fitted it carefully into the fireplace making sure there were no gaps. Bats can sense air movement, particularly if the bedroom window is open, so they’d see the open fireplace as a thoroughfare with their sophisticated echo-location. Once the route was blocked, they probably wouldn’t try to go down the chimney, but even if they did, they’d meet the obstacle of the Chimney Sheep™ and turn around to go back up.

Now Mrs Emley can sleep peacefully again, and has the added bonus of a draught-free bedroom in the winter! 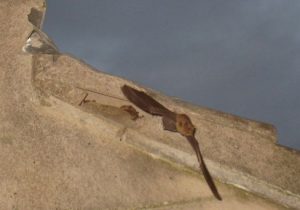