Felt is the oldest textile known to man. It is said that a nomad was walking across the desert when he got fed up with his sandals chafing. He stuffed a handful of camel hair into his sandals to cushion them….after a while the combination of sweat and friction produced a mat of felt and he had invented the first insoles. Wool has scales along the shaft of the hairs; when these are interlinked they combine in an irreversible process.

There are two ways of producing felt. The traditional method is to place layers of wool that lap in different directions, sprinkle it with water and soap, then roll it / pound it / generally abuse it. The fabric is plunged into hot then cold water to shrink the fibres and produce a piece of fabric. Commercial felt is produced by using wool that has been scoured and dried. The fibres are layered on a huge conveyor belt, and rows of needles with barbs of them plunge in and out of the wool very quickly. This has the same effect of meshing the scales together, and produces a more even finish.

The first chimney draught excluder prototypes that I produced were made by the wet felting method. I stuffed handfuls of carded wool into catering caps. These produced exactly the correct size discs. I put them into plastic bags, poured boiling water and soap onto them, then with the mess of raw wool and soap inside the plastic, blitzed them with a hand sander.

The final stage was to rinse them in a washing machine. This produced surprisingly pleasing discs, but they were all a little different. I tried out all kinds of variety of wool types and combinations. Some wool produced lovely soft discs that were too soft to hold their shape. Alpaca produced a strange toupe like effect. After a lot of trial and error Herdwick was the clear winner. It felted to produce a nice thick disc that was flexible enough to compress into a range of chimney flue sizes but stiff enough to hold its shape and hold itself in the flue. It could also support the weight of the handle + dangle. 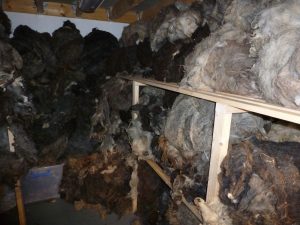 I then needed to produce the discs on a commercial scale so that I could start selling them. I bought 150kg of Herdwick wool (this is a very large volume of wool!!) I bought a table felter and had it shipped over from Canada. It was a bit of a risk as I had not used one before, but looking at the way it worked it was like a scaled up hand sander, comprising a large flat area that moved against a rigid one. What could go wrong?

I stuffed handfuls of Herdwick wool that had been tumbled and picked into food hygiene hats, and arranged eight of them on the table. I covered them with very hot water and soap, put the lid down and set the machine to vibrate for 10 minutes. Then I turned them over and set them off for another 10  minutes. With great anticipation I lifted the lid and carefully peeled off the moulds. To get eight piles of wet soapy smelly wool. I tried it again with the felter set to longer periods of time. I tried different blends of wool. I tried adjusting the compression settings.

When I had been researching felt I approached a number of manufacturers to see if anybody could produce 20mm thick felt for me, but to no avail. Felts that I found that were anywhere near suitable were £140 per metre which would have made the product unfeasible. I looked again and this time found a manufacturer that was prepared to produce the chimney draught excluders to the right dimensions at a price that was workable. They could produce it out of Herdwick and they were in the next county. Things were looking up again!