It is time to update you on our progress with all our tree planting and tree growing progress that we do with our Community Interest Company, Buy Land Plant Trees (BLPT). For those of you that don’t know, we set up BLPT to buy poor agricultural land in Cumbria and plant trees on it. Although what we are doing is pretty small scale, we believe it is important to ‘do our bit’ to help the planet and the community. We have a seven-acre field where we have planted 9,000 trees, a 13-acre field where we have planted 25,000 trees and last year, we bought the land on Low Fell near Loweswater in the Lake District which totals about 160 acres.

From every purchase made with Chimney Sheep, a proportion of the profits goes towards BLPT.  As our loyal customers, we like to update you on what we’ve been up to, so you can see what your money has gone towards.

Read on to find out about out latest progress…

An update on our 13-acre field 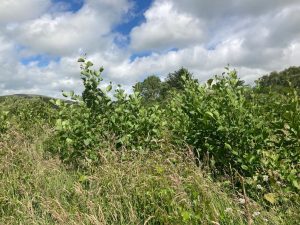 Some of you might remember that in March last year, we planted out our 13-acre field with 25,000 saplings using the Miyawaki Method. We had the help of some professional tree planters (thankfully) and we followed behind with a group of volunteers adding jute mulch mats to every tree. As you can see from the photos, the trees have grown big time! A good proportion of them have quadrupled in height from when we first planted them and have some fantastic leaf growth. Everything is growing pretty well with some brilliant growth from trees such as birch, hawthorn, field maple, oak, aspen, crabapple and Scots pine to name but a few. In the wetter ground, both the white poplar and willow species have done brilliantly which is a great sign and will help to prevent future flooding. Safe to say, the 13-acre field is thriving but we’ll continue to keep you updated on the further growth of our army of 25,000! 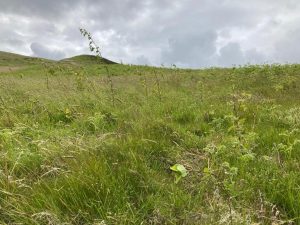 If you read our last update, you may remember that we’d planted 16,000 trees during the winter on Low Fell and had another 19,000 trees to plant during the early spring. These 35,000 trees were kindly donated by the Woodland Trust, Cumbria Wildlife Trust and you, our customers! These were planted close together in clusters, mimicking how they would grow naturally in the wild if there was a seed source nearby. These little saplings blended into the landscape so well that we were slightly concerned they were going to get stomped on by walkers! We are pleased to report the vast majority have burst into leaf and are growing nicely, as you can see. PHEW!

One of the species we have planted on Low Fell as part of our Buy Land Plant Trees project is a dwarf birch tree. Once upon a time, the small montane species used to be all over the Lake District fells, thriving in moorland and upper terrain away from towering trees. Sheep were then introduced onto the fells and they enjoyed munching away at them, as did the deer! There are one or two clinging on in very remote gullies in the county but they’re incredibly rare in Cumbria. We were really keen to reintroduce dwarf birch so we went to the Dundreggan Estate near Inverness, part of Trees for Life, where they have a nursery specialising in montane and upland species. We brought back several hundred dwarf birch which we have reintroduced to Low Fell, planting them near the summit. They have been thriving well in their new home and it’s exciting to know that such a rare plant is making a comeback thanks to the generous donations of you wonderful Chimney Sheep customers! 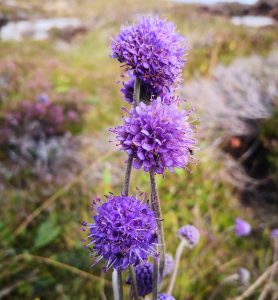 Looking ahead, we will be planting 2000 flowering plug plants of devil’s bit scabious thanks to a grant from the Cumbrian Wildlife Trust as part of their Planting for Pollinators project.

This is the plant on which the incredibly rare marsh fritillary butterfly lays its eggs. These butterflies actually became extinct in Cumbria due to the scarcity of devil’s-bit scabious. The butterfly was reintroduced into a couple of nature reserves in Cumbria and is now starting to make a wee bit of a comeback. When we had the site surveyed, we were pleased to hear that devil’s-bit scabious and marsh fritillary butterflies were present in small numbers. Thanks to this grant we will be able to plant lots more of the purple flowering plants in areas of ‘flush’ – wet boggy areas that plant thrives in – and hope to see the butterfly recolonising Low Fell in larger numbers soon.

As always, a huge thank you to you for all of your purchases. Without them, we wouldn’t be able to do any of this.

That’s all for now, but we’ll keep you updated.

As we mentioned above, we have planted several hundred dwarf birch towards the summit of Low Fell. Once a common montane species in The Lakes, it is now extremely scarce, we are excited about reintroducing it to the area and are looking forward to seeing it thrive.