“Sheep wool is insulating, durable and naturally hygroscopic – absorbing and releasing moisture slowly. That’s what makes it ideal as a chimney stop. Any home with one chimney will lose 4% of its energy up the hole, so it makes simple, obvious sense to block the flue and insulate the blockage at the same time.”

Having an open chimney is like leaving a window open all the time. Warm air escapes from a room at a rate of 40 cubic metres per hour – and cold air is pulled in round doors, windows, through plug sockets and even through walls to replace it. So insulating the chimney doesn’t just stop draughts, but reduces draughts from other parts of the building too.

Chimney Sheep Ltd is trying to encourage the insulation industry to include chimney insulation as part of the raft of standard measures – being chosen as a Green Hero is an excellent opportunity to communicate this message. 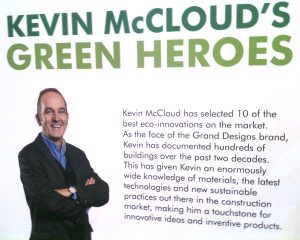