2013! What did we get up to in 2013? This was going to be our first full year of trading, the second calendar year the Chimney Sheep had been on the market

The first article of 2013 wasn’t directly about the Chimney Sheep itself – but it did tell us more about the creator – Sally Phillips.

Our local Times and Star ran an article covering what local people got up to on the weekend.

Here Sally expressed her love for the outdoors and the environment – enjoying activities such as sailing, mountain biking, hiking and tree planting.

There were a few small Chimney Sheep plugs – mentioning she fulfills orders every weekday and even Saturdays – it sounded like Chimney Sheep sales were growing, as if she ”takes a few days off work the orders really start to accumulate” ”we even had an order on Christmas day!”.

Throughout 2013 we had many articles in various newspapers, magazines and online blogs including a fantastic review on Radio 2’s blog page – surmising that the Chimney Sheep was a ”lovely simple solution and well executed”

Three different articles in three different house and home magazines – these little articles gave readers an insight into how the Chimney Sheep had grown as a product – our product size range had almost doubled in size and we had reached over 2,000 sales – the product was slowly being recognised as being both an energy saver and cash saving device! 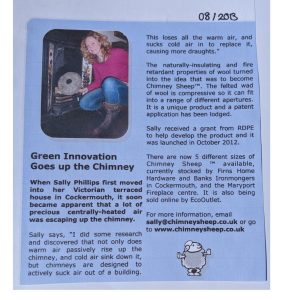 Chimney Sheep was one of 11 business chosen to participate in a structured program of business planning, networking and mentoring to help improve their business outlook. As well as the opportunity to bid for up to £17,000 to help grow their company.

Sally is all fired up for place on programme!

Sally was incredibly excited as she saw this programme as a way to improve the company, boost sales and improve her business knowledge.

This was a brilliant opportunity as Sally ”had never done any business studies and sometimes felt like she was making it up as she went along”.

”She had an excellent winter, selling more than 2,000 Chimney Sheeps, but it would be great to get some mentoring, help, and advice in scaling up the business ready for next winter”

This program provided Chimney Sheep with a ”real step forward” – providing us with a chance to expand to wider markets and network with policy directors. 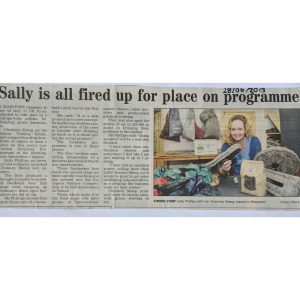 Our biggest achievement of 2013 was our Green Economy Award

We were lucky enough to win the award and with it recognition that energy loss via chimneys is a real ongoing problem!

It was noted that around 2/3 of UK homes have open chimneys -a large proportion of which are left open year round. On average one of these homes will lose 520 kilowatt-hours of energy through heat loss up the chimney. Equating to 185 Kilograms of carbon dioxide ( fuel dependant).

The Energy Efficiency Category was even sponsored by the Department of Energy and Climate Change.

This was a brilliant opportunity to shout about the importance of heat loss via the chimney – with the chimney sheep being shown as an innovative, cheap and effective solution to a more energy efficient home. 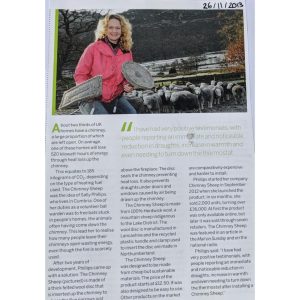 Another great article from our local Times and Star!

This piece aptly celebrated our success in winning the our Green Economy Award in Energy Efficieny. It was noted that we were the smallest company nominated – up against some of the UK’s largest businesses including Sainsbury’s and the Co-operative Group!

This was another opportunity to spread the importance of Chimney Draught exclusion and its significant energy and money saving effects. 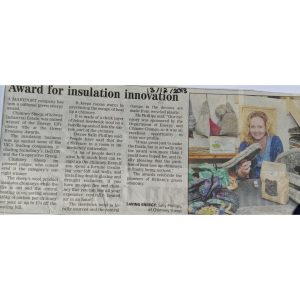 The Baa-bargain that can reduce energy loss and cut heating bills.

This was a great mention in the Independent – a well followed national newspaper – this article actually led to a small direct increase in our December 2013 sales!!

The Chimney Sheep was shown to be an award winning simple solution to reducing energy bills in the home – it was noted that compared to other energy saving measures ie double glazing or a more efficient boiler the Chimney Sheep was incredibly cheap (starting at £15.00) with the products on average taking approximately 6 months to pay themselves off in bill savings.  This was a delightful plug highlighting that you don’t always have to invest significant amounts of money to ensure your home is more energy efficient. 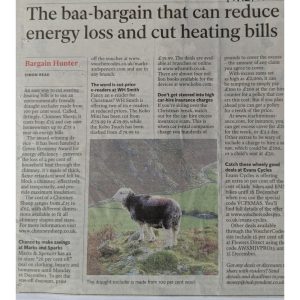 A punny article in our local Times and Star all about the Chimney Sheep again! This time it stated useful facts and figures showing how useful the chimney sheep really is – helping to prevent over 40 cubic metres of air escaping up the chimney per hour!