After a brilliant year of winning multiple awards- 2016 was a quieter year news wise . But it was a year of record sales, and our first international publication!

Saga magazine wrote a small feature on great money saving ideas – Chimney Sheep was mentioned here as a good investment for saving on your energy bills.
With a 6 month payback time (approximately) the sheep will have paid for itself in less than a year!

This was our first international article! This online article targeted at an Australian audience recognised the Chimney Sheep as a brilliant way to help reduce your energy bills, not just here in the UK but internationally as well. 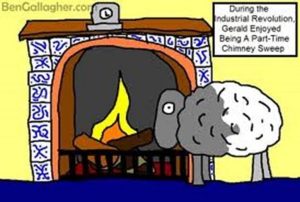 A half page article in our local In-Cumbria showcasing how the CN Awards helped the business grow.

The CN Awards brought extra publicity for Chimney Sheep meaning a good increase in the number of sales.

The CN business awards ”really raise your profile” meaning ”more people have heard of us”. 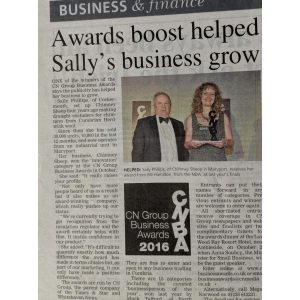 A Full page spread in My Green Pod.com Magazine !

This was a great in depth article telling the story of how the product came to be, the awards the product had won and the next steps the company is trying to achieve

The article highlighted the issue that Chimney Draught Excluders were not recognised and were largely ignored by the Energy Industry. The Chimney Sheep could help reduce national energy output by around 1%, however in order to get its properties recognised by the British Board of Agrement, and so larger energy companies,  the product had to go through extensive testing showing that the materials performed reliably every single time!

This article showcased our aims to make the products more widely available to those in fuel poverty, through housing associations and the ECO obligation , therefore hopefully helping those most in need reduce their energy bills!