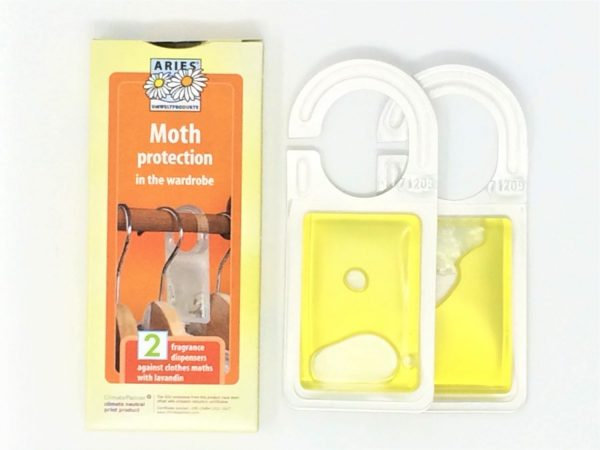 Fragrant dispensers to hang in the wardrobe and deter moths

There are two tactics when it comes to dealing with moths in the home: DETER or DESTROY. This product is for kind people who would rather persuade the moths to go elsewhere than to kill the wool munchers. It is also for people who have gone to a tremendous lot of trouble to DESTROY moths and don’t want them to come back.

How to use Lavender Moth Deterrent

This dispenser contains 65% pure lavender essential oil with 35% soy bean oil carrier. Simply peel off the foil backing and hang in the wardrobe. It lasts for six months. There are two in the pack so it’s recommended to hang one in each wardrobe. They can also be placed in sock and underwear drawers. You can also hang them in places where you think a moth might find its way in, such as near a vent or even in the chimney.

Lavender has been used for millennia for its various properties but a recent study compared all traditional anti-moth remedies, including cedarwood, clove, and citronella, and  found that lavender was the most effective at deterring moths. The clothes moth is tiny and can find its way into your home in a multitude of ways. After Mr and Mrs Moth have met and mated then Mrs Moth will be actively seeking somewhere to lay her eggs so that her 200 or so baby larvae have something nice to eat when they hatch out all hungry. They eat keratin so this is anything made of wool, silk, fur, or feathers, or anything mixed with these. The idea of the lavender deterrent is to persuade her to go somewhere else to lay those eggs. It will also act as a discouragement to come in in the first place.

The deterrents and moth traps / moth killing products have to be used separately. If you use a pheromone trap to attract male moths then it will confuse the poor fellows if you have a deterrent nearby. So be tactical and use deterrents after you’ve killed your moths, or to avoid them coming in in the first place, and hang the traps in places away from the deterrents to monitor for more visitors, or as part of the DESTROY phase of the operation.

It has a very clean lavender smell so not only does it smell terrible to moths, it smells gorgeous to humans. Every time you open your wardrobe you will get a lovely waft of lavender scent. If you are an insomniac like me then it can help to sooth and calm.

Why don’t we use Lavender Moth Deterrent on our Chimney Sheeps?

We’d love to, but it only lasts 6 months and the Chimney Sheep should last around 10 years! The Chimney Sheeps are treated with Borax which is part of the DESTROY phase. The larvae have to eat a small amount of the product in order to be killed by it, which is why it wouldn’t be suitable to apply borax to precious cashmere garments or antique wool rugs. The borax is actually a fire retardant which has the beneficial side-effect of killing moth larvae, so we can’t sell it as a moth control product.