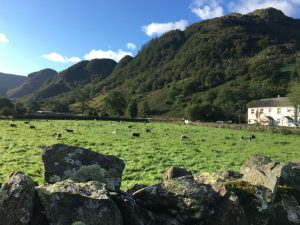 If you aren’t sure what Operation Wool is, let us explain…

We need wool to create our bestselling chimney draught excluder, the Chimney Sheep® as well as lots of our other products such as our Snugfeet and our Felt Shillies. And, we don’t just need any old wool. We need Herdwick wool. Why? Because it has some unique properties that make it super functional – it is coarse and wiry which ensures it can hold itself in the chimney. Like other wool it is also very durable, breathable and hygroscopic.

We used to buy our Herdwick wool felt as a finished product from a supplier who would have bought it from a merchant, who would have bought it at auction via the wool marketing board (a lot of steps before it got to us). However, it seemed silly that we were surrounded by sheep farms and not buying directly from the farmers. So, three years ago, we

decided to change that!

Now, we buy the Herdwick wool directly from several farmers in and around Cumbria who have their own flocks of Herdwick sheep. It is both beneficial for them and us – we can offer them a better price than what they would get at collection depos and by cutting down the supply chain, it makes it more affordable for us.

And this year 20 TONNES! Yes, you read that right 20 TONNES! That is the wool from about 20,000 Herdwick Sheep which is about 25% of the UK Herdwick sheep population and has filled four lorries! Safe to say…it’s a lot of wool. A lot, a lot.

The process of collecting the wool is, well it’s hard work and very physically challenging! Our first day started in

Borrowdale at 7:30am with farmers from all over the area coming to drop their wool and help out. We loaded 99 bales on that first morning which only just filled one lorry! Despite the hard work of lugging huge wool sacks, it is wonderful to see so many farmers coming together, helping each other out and it’s a great opportunity for us to chat to them about the sheep, the farms and the landscape as well as them to chat to each other. It really is rural community spirit at its best!

This year, though, the financial support Operation Wool provides to farmers has been particularly crucial. This is because since the COVID-19 outbreak the wool industry has tanked, like many other industries. The global wool market has been pretty much shut down since February which has resulted in vast volumes of wool lying unsold in depos and has caused the price of wool to crash, making it financially unviable for farmers to sell their sheep fleeces.

“Well why don’t the farmers just not shear their sheep?”, you ask. Many people don’t realise that sheep MUST be sheared as part of their welfare. It would be cruel not to. Letting the wool grow would put the sheep at risk for overheating (there is a reason we use wool to stay warm!), discomfort by eventually impeding their movement and disease by increasing the risk of parasites. Not shearing the sheep, isn’t an option.

So, what is done with wool if it can’t be sold? For many farmers it doesn’t make financial sense to store or keep the wool so it will either get thrown away or even worse, burnt which is a heart-breaking thought and of course, negatively impacts the environment.

Operation Wool has turned into something much bigger this year and has helped to support our local farmers, help the environment and celebrate this wonderful material. It is something we are really proud of here at Chimney Sheep and we love shouting about all the brilliant farmers in the area and of course their beautiful Herdwick sheep!

This isn’t the end of the journey for the wool. The wool has now been transported over to Yorkshire to be scoured (which basically means that it is being cleaned) and then will be driven over to Austria where the wool is treated with a unique ionic protect plasma, which will make it 100% moth proof, and then felted. It will arrive back at our factory in Maryport at the end of the year.

We’ll keep you updated on its journey. Stay tuned!